Saturday we started off the day with waffles at Grandpa and Grandmas. He makes the best waffles! Then it was off to the Festival of Trees and to see Santa! The trees were amazing yet again.They had trees decorated for all the Disney princesses, including Tinkerbell. Addy took a picture by the Tinkerbell tree for Grandma Wood who loves Tink! They had Spider man, Superman, Batman, they had it all. Here are the kids highlights! P.S. The American Flag tree was for the soldiers-so that was for you Tay! 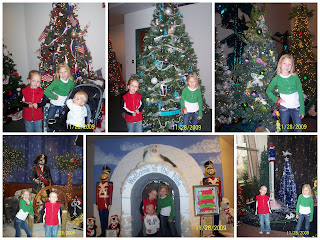 So when we went to go see Santa, something rather unusual happened. Dawson was scared. Not just a little, he was crying and would not sit or talk to Santa. Crazy! Never saw that one coming. It wasn't until I told him a "little secret", that he was all for talking to the big guy. I told him that this was just one of Santa's helpers dressed up like Santa,ya know like Halloween. Santa was to busy, so he sent his helper to talk to the kids and bring back the list of what they wanted. "OH" he said. Then off he ran while drying his tears to go and talk to "Santa".
Ky of course cried when sitting on Santa's lap.
Addy sat and told Santa what she wanted. No picture obviously with all the drama, oh well maybe next year!