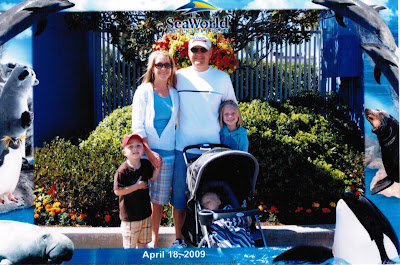 Our last adventure on our vacation was Sea world. We had a great time! It was great company, great weather, great entertainment and just plain FUN! 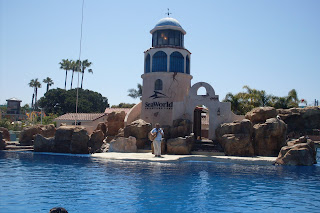 Ky at the dolphin show before we got soaked. Um yeah the kids, meaning Addy, wanted to sit in row 5! Believe me that did not happen at the Shamu show! 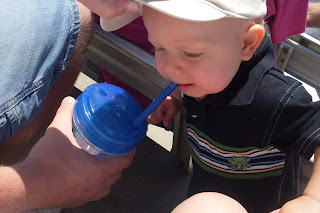 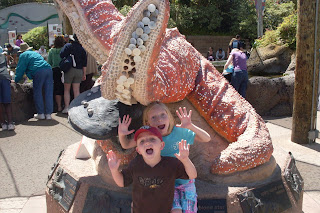 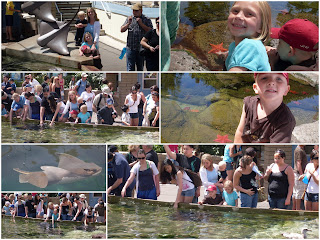 At the Manatee exhibit 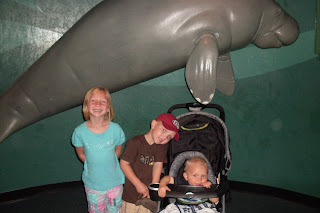 We really had so much fun at all the shows and exhibits. By the end of the vacation I must have had camera block or something. I really don't know why I didn't take more pictures at Sea World. I guess I was just having to good of a time with my little family!

THE FEW THE PROUD THE MARINES 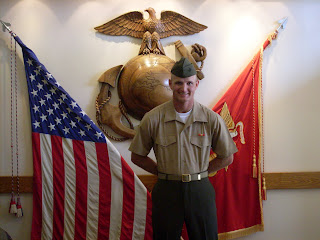 The most exciting part of our trip was going to the Marine base-MCRD San Diego. Thursday morning we got up and headed over there for family day. First we had a speaker and then waited to see all the recruits do a 4 mile motivational run.

The kids awaiting to see Tay Tay for the first time! 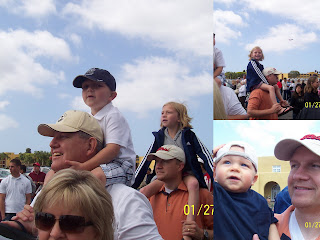 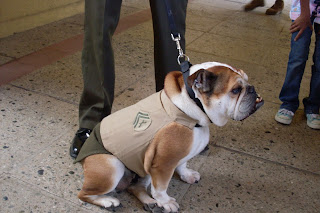 Of course the mascot, The Marine Bulldog was there to cheer on the recruits for the 4 mile runTaylor before the run-on the left- Taylor after the run-on the right

It was our first time seeing Tay in 3 months. He looked so good and yet a little different. After that we headed to the auditorium to watch a movie about what really goes on at boot camp. Very glad people are willing to fight for our freedom. We are really blessed. You can't help but walk out of that movie feeling humble and extremely proud to be an American! The we were led to some bleachers where the recruits came out now changed and looking good.

We then got to spend the rest of the day, well until 6:00, with Tay. First we went to a lunch that the local LDS ward for the recruits put on. It was wonderful with a cake cutting ceremony and all.

The LDS recruits at the luncheon 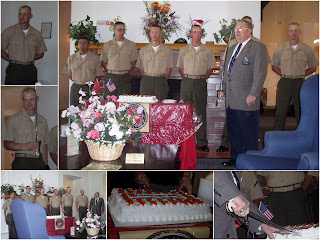 We then met Taylor's platoon leaders. We spent the rest of the day walking through the museum, which my kids loved! Just one of the pics at the museum. It was really cool. 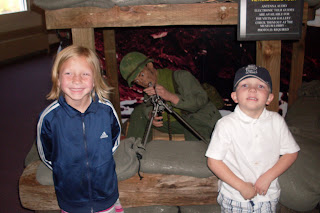 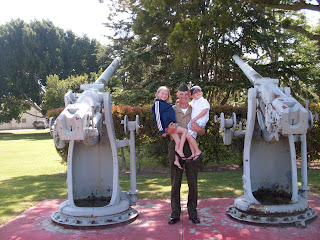 We shopped a little and just asked Tay a million questions. 6:00 came way to fast. We said goodbye to Tay and headed back to the hotel. We ordered pizza and went to bed.
The next morning was an early one. We special ordered these shirts for the kids-SO CUTE! 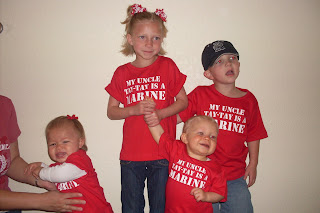 We got to the base at 7:30 am to see the flag rising ceremony and to hear the General speak, who is a woman! Then off to the graduation. 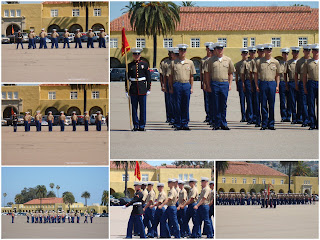 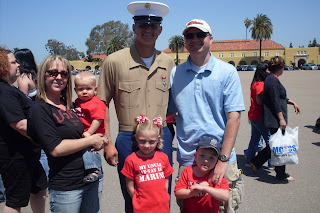 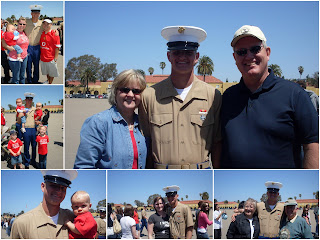 The graduation was really neat. After it was over Tay was free. He is now an official United States Marine! We are so proud of Taylor! SEMPER FI

So Vegas was part 1 of our vacation,which was great. Now on to part 2. We left Monday morning after Easter for California with my sis Tina and her family. Being Bry's last week of his official tax season, I planned on going myself with the kids and he would met up with us a few days later. However Jenny, Taylor's girlfriend, came with me. The drive was great with no problems, I was grateful to have Jenny there to help out. She rocks! We arrived to our hotel which was right across from the main gate at Disneyland. We unloaded the car and then headed off to meet up with Kristen and her family. It was a fun night. We met up at Balboa Pier and walked down to the end and ate at Ruby's. 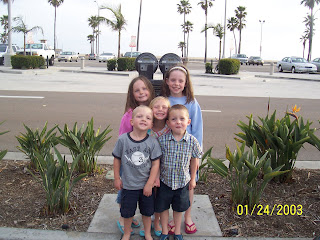 Then of course the kids wanted to play in the ocean. It was a hoot watching them. They even thought it was fun when we had to strip them down to their skibbies to rinse them off. Oh the joys of being a kid! It was a great night. I enjoyed catching up with Kristen and watching my kids have a ball in the ocean!
The next morning we headed down to San Diego. On the way down we stopped off at the San Diego Temple. It is so beautiful. Excuse the outfits we were going to go right to the beach but the clouds must not have got the memo! 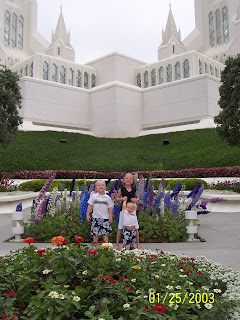 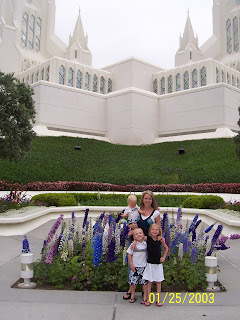 Since the weather was not really beach weather, we decided to go and walk down Old Town, which was even better because Jenny had never been. We love Old Town we ate there a few different times and love the cute little shops. Our hotel was literally right down the street. We ate, shopped and had a great time even when it started to sprinkle a little.
Addy and Dawson outside of Fred's. Just one of the yummy Mexican Restaurants in Old Town 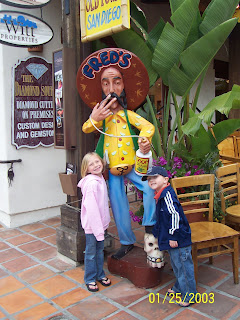 We headed back to the hotel and climbed in the car and headed to down town San Diego. We shopped some more and went to a movie and dinner. The kids were now tuckered out. Athough Addy and I did find time to go to the hot tub for a minute.
The next day we went to the beach. It was a beautiful day,yet a little windy. The kids didn't seem to mind the wind at first, they just played in the sand and had a great time. 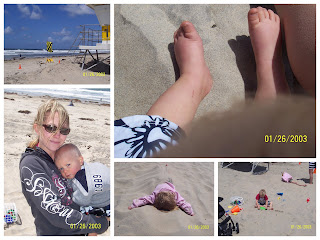 The wind eventually took it's toll. We ate Mission beach and then headed back to the hotel to play in the pool and hot tub. The kids liked that just as much, although I would have preferred to be at the beach. That night we went to La Jolla beach and just walked around. 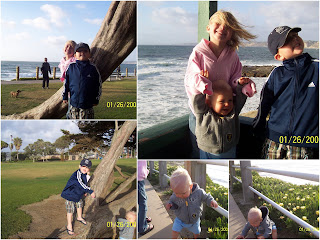 The rest of the family showed up that night. We got the awesome news that Eliza was going to be a big sister! YEAH!!!! We all went to bed early that night, we were all way excited to see Tay the next day! I think we all dreamed about..... The Few The Proud The Marines!

This year we spent Easter in Las Vegas. We had such a great time. The kids had spring break so we headed down to where the weather was warm. It was fun to be with Nana, Papa and to see Daddy every night. We went to the park, went to the pool, went to Red Rock and had a BBQ, and spent time with family. It worked out great that I got to see all of my sisters and the kids got to see their cousins! 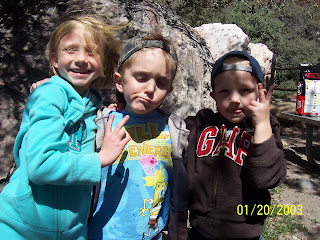 Ky and I at Red Rock 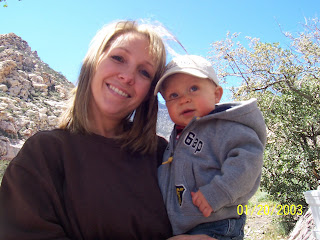 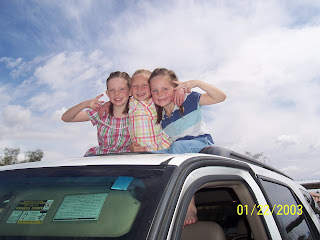 Ya they are hanging out of the sun roof! We had to stop by Bryan's office for a minute and I came out to find this! All I could do was laugh and tell them to smile! Gotta love cousin time. 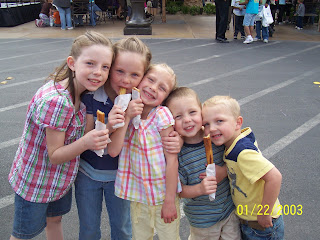 Hannah, Hailey, Addy, Braiden, and Dawson. We went to Town Center,which is an outdoor shopping mall . They had a really cool outdoor play place with lots of Easter activities going on. This was right before the big Easter egg hunt. 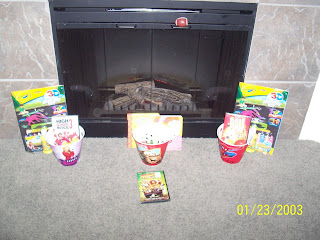 The kids were excited to see their Easter baskets and find their eggs. The Easter bunny always hides eggs for the kids as well. 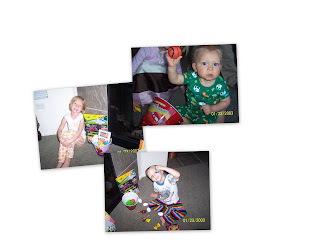 The Kids in their Easter clothes before church, so cute if I do say so myself! 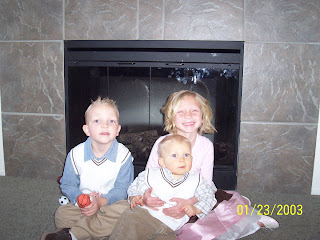 We had a wonderful Easter spent with our family and hope you all had a great one as well!