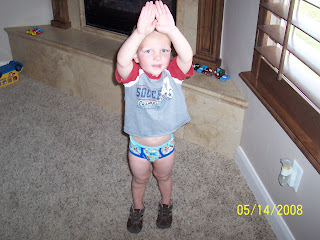 Yes we are doing the enormous task of potty training our busy boy who barely slows down to sleep. I am not exaggerating when I say this has been an ENORMOUS undertaking. We have worked on this off and on for a while now. Like clear back in January he was accident free for a couple of days. I was in the kitchen and he came up to me and said, "Mom watch this," and he just peed his pants right there! I was shocked. That was how the adventure started and continued for a while. He just chose when and what days he wanted to be a big boy. So being pregnant and it being tax season I chose the less stress route and unfortunately put him back in pull ups. I think he is just content to be in pull ups forever. Last week he threw a fit because I would not let him wear underwear. I thought if he wants to wear underwear so bad maybe now he is really ready. So onward we went on this adventure. He is really doing well on the potty side. He is dry every morning and tells us when he needs to go. He even stayed dry at Addy's dance recital and at dinner! YEAH! He refuses to go poop in the potty. So we decided to keep him naked so he no longer has this false sense of security with his underoos on, that and I have been giving him apple juice. Fingers crossed this will all be over soon and one day I can look back and laugh at the whole thing. Yes maybe one day. If you have any suggestions we will be happy to listen. We are willing to try anything to get him to poop in the potty.

Good luck! I really hope he gets the hang of it for your sanity's sake. ;) See you soon!

Sounds like he is getting the hang of it! It will all be over before you know it. Keep on trecking!!!

Sorry it's not going well! Hope you have a very successful week!

You are ambitious girl! Didn't you just have a baby??? Good luck- it will be worth it when it's done!

Well, he looks so dang cute in those big boy underoos! As for the advice part, don't pull all your hair out--he'll get the hang of it. Here's to a super successful week :)